Update October 2018 ... Maybe I should have called this page "Hollywood at Fort Knox," because I am adding the film "Stripes" (1981) to the page, but I will also be adding James Bond in Las Vegas in "Diamonds Are Forever" (1971). To go directly to the "Stripes" section, click here.

Fans of James Bond films know that Goldfinger (1964) was partially filmed at Fort Knox, Kentucky. This webpage shows some of the film scenes, identifying their locations and comparing to what those locations look like today.

In the movie’s basic plot, the villian Goldfinger plans to detonate a small atomic device (a “dirty bomb”) inside the U.S. Bullion Depository at Fort Knox, making the gold reserves radioactive for several years, thus bringing chaos to world financial markets and greatly increasing the value of his own personal gold supplies. Goldfinger plans to reach the Bullion Depository (Gold Vault) and put “Operation Grand Slam” into effect by neutralizing the military force of soldiers stationed at Fort Knox with nerve gas, sprayed from the air by his personal pilot’s fleet of airplanes – Pussy Galore’s Flying Circus.

As Pussy Galore’s Flying Circus approaches the Bullion Depository from the southeast, they fly over North Dietz Acres military housing area at Fort Knox, then toward the Depository. 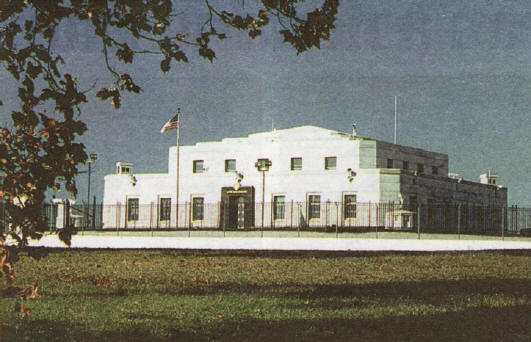 Next the planes flew over a group of wooden troop billets, which were torn down several years ago.

The planes next flew over a motor pool which was probably St. John Tank Park (Bldg. 2958).

The planes again flew over wooden troop buildings which are no longer there.

Goldfinger’s convoy starts in a hidden position, then drives into Muldraugh, a small town just north of Fort Knox. Despite showing Bond in one of the trucks, Sean Connery was not in this filmed convoy. According to internet sources, Sean Connery did not travel to the United States for any scenes shot in this country. 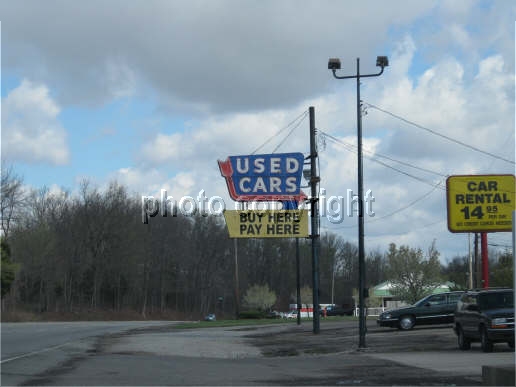 The Used Cars sign is the original as seen in the film (arrowed in the photos above, in the center distance).
Note: Sometime between 2011-2016 this sign was covered with a plastic sign in the same style.

The convoy is then seen turning onto Famous 4th Div. Rd., from Eisenhower Ave. (the wooden buildings seen in the background are no longer there).

In the next scene, the convoy is turning into the Depository drive – from here on, none of this was filmed at Fort Knox. Despite the clever street signs – Bullion Blvd. and Gold Vault Rd. - this approach drive and all the subsequent scenes showing the Depository (inside and out) were filmed on sets in England.

Note – Some references have reported that the “Kentucky Fried Chicken” street scene, where Felix Leiter and his fellow CIA agent watch Oddjob drive past Joe’s Drive-In, was filmed in either Louisville or Lexington, but it was actually filmed in Opa-Locka, FL (north Miami area). An Opa Locka Blvd. street sign is visible in the scene showing the Joe’s Drive-In sign. (As an aside, the first time the agent looks at the tracker screen, while Leiter is inside KFC, the map location is just off Lower River Road near Meadowlawn, KY, just southwest of Louisville.  For the next tracker screen scene, the location has moved north up US Hwy. 31W to about West Pages Lane, in Pleasure Ridge Park. When Leiter loses the signal after Oddjob’s car is crushed, the screen moves from Hwy. 31W south of Pleasure Ridge Park, to a location that is now the south end of Louisville International Airport (Standiford Field).

A model of the Bullion Depository, displayed in the Patton Museum at Fort Knox, is said to have been the original used in Goldfinger, when Goldfinger briefs his fellow criminals on “Operation Grand Slam.” Actually, it appears that more than one model was used in the film, and although the museum model may not be the more detailed model that can be seen in close-ups, it is apparently another model that was also used.

This model does not appear to be the main model that was used in the briefing – the model that Bond hides beneath while he eavesdrops on Goldfinger’s plans, and is seen through the model windows during a close-up view. The joints between the stones of the walls cannot be seen in the museum model, the doorway is shaped differently and lacks the legend UNITED STATES DEPOSITORY in gold letters over the door, as seen on the film model (and the real Depository), the corner towers are different, and other details do not match this model seen in the film.

However, the Depository model that appears in the background as Goldfinger describes his plans to dynamite the electrified fence around the compound, may be the model that is now in the Patton Museum. Its doorway appears more like this model, and it appears to lack the UNITED STATES DEPOSITORY legend over the door. At any rate, the filming of these models was not done all in one take, or possibly even during the same shoot, since the model cars change location between scenes, and the model trees are shaped differently in different scenes. It is entirely possible that different Depository models were used as well.

The marker that is displayed with the model now in the Patton Museum at Fort Knox.

Although it may seem strange, given the theme and content of the film, the U.S. Army fully cooperated with the filming of Stripes (1981), and most of the film was shot at Fort Knox, Kentucky, which was the home of the Armor Center and School when the filming took place there in December 1980.

Starring primarily Bill Murray, Harold Ramis, Warren Oates, and John Candy, Stripes follows the antics of a platoon of misfit recruits as they go through basic training, followed by a special assignment with Top Secret equipment. Most of the filming at Fort Knox took place among the World War II era wooden barracks buildings in the basic training complex. These buildings were all torn down ca. 2005 to make way for the Gen. Timothy Maude Human Resources Command center. However, a few buildings seen in the film still remain at Fort Knox today.

I wish to thank Matt Rector, Cultural Resources Specialist at Fort Knox, for assistance with information used for this webpage.